We are almost two weeks into our big girl bed transition, and still going strong with Waverly sleeping in her bed during both naps & bedtime with zero issues at all! 🙂  I am still a little shocked every single time, although clearly I should have given her more credit, girlfriend is rocking this whole thing like she could have done this months ago.  I am so proud of her & only a little emotional over what a big girl she is acting like these days!

My husband starting making Waverly’s bed right after Christmas, which was about the same time we started talking to her about it, showing her the bed through the construction process & telling her about the transition pretty much once a day.  We explained to her for weeks that she would be passing her crib down to her little sister, which she seemed really excited about.  I’m hoping the same excitement sticks around when baby girl gets here, fingers crossed! 😉
We decided to make the move on a Friday so we both didn’t have to work the next day, we honestly were fully prepared for a long, sleepless night (which we might as well start getting used to again, anyways).  She was a little confused when both her bed & glider were no longer in her room, but we did our best to make all the other parts of our bedtime routine exactly the same.  I read her books in her bed instead of the glider, & since it was night one, stayed laying with her for a little while after we turned the lights out.  When I left she was still awake, but perfectly fine, & fell asleep like usual within minutes.  My husband & I were both completely shocked!  I kept waiting to be woken up in the middle of the night by either footsteps, her standing over me because she magically found her way out of the room, or her closet thrown around in complete chaos, but she slept entirely through the night.
Since then, naps & bedtime have gone the same way, and I honestly think she loves going to sleep more than ever before.  Our biggest issue is her jumping on the bed, which she loves to do, but will only do it while we are in her room before she goes to sleep, never once after I have turned the lights out.  I’m guessing she either doesn’t realize she is even able to get out of the bed herself, or has just decided to follow directions, both of which seriously blow my mind! 😉 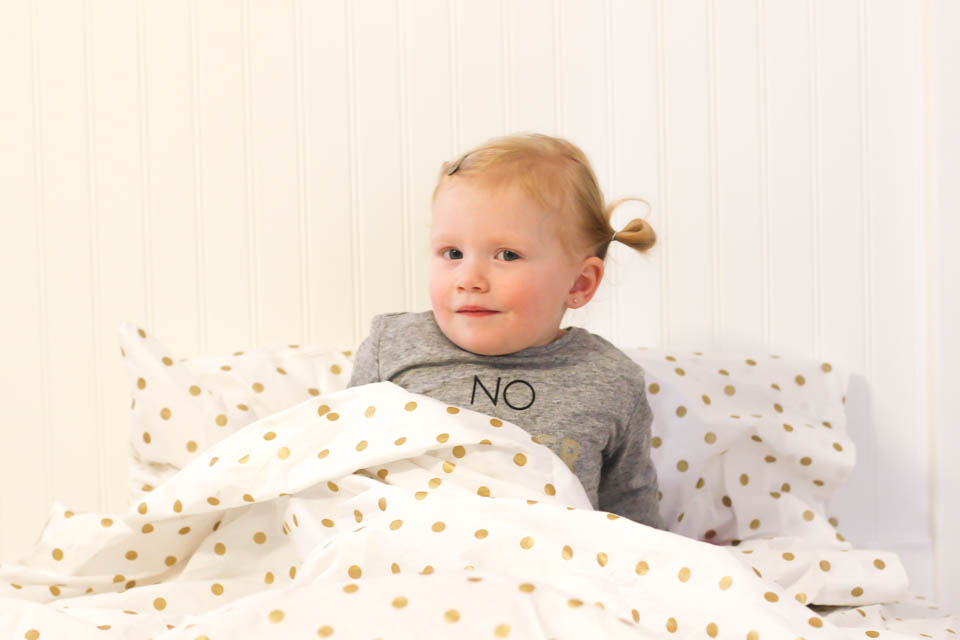 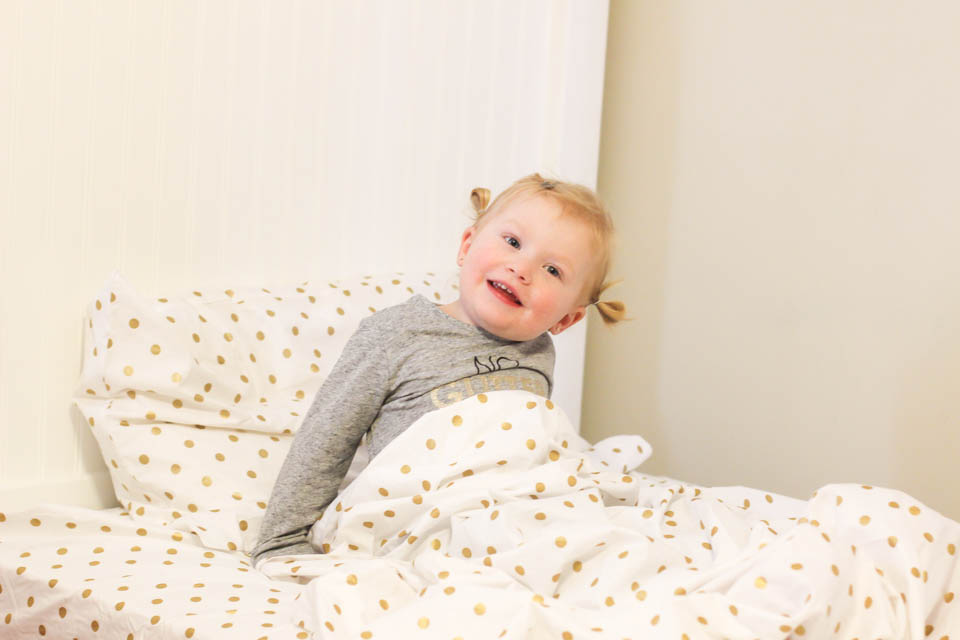 My husband made the bed entirely himself!  He started using a plan but then when we realized it didn’t fit the sheets I had already bought, threw the plan out the window and did the rest all on his own, through trial & error.  The bed is made out of pine & ash, all bought from Home Depot or Lowe’s, and bead board was used for the head & foot board.  The last part of the process was obviously painting it white, he used a child-friendly paint to pair with the fact that everything in the bed was entirely real wood, nothing processed.
I am amazed at what he was able to do!  My hormones had me annoyed halfway through the process when I just wished we had a bought a bed instead (so we could move on to the other parts of our house project & nursery list), but I couldn’t love it more and am so, so thankful to have something so special in our family for years to come! 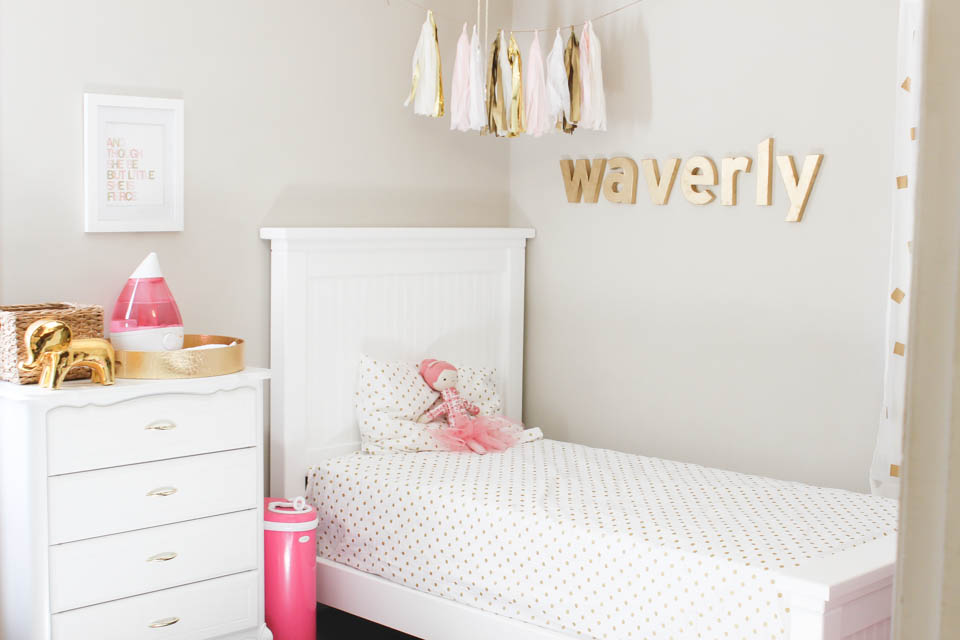 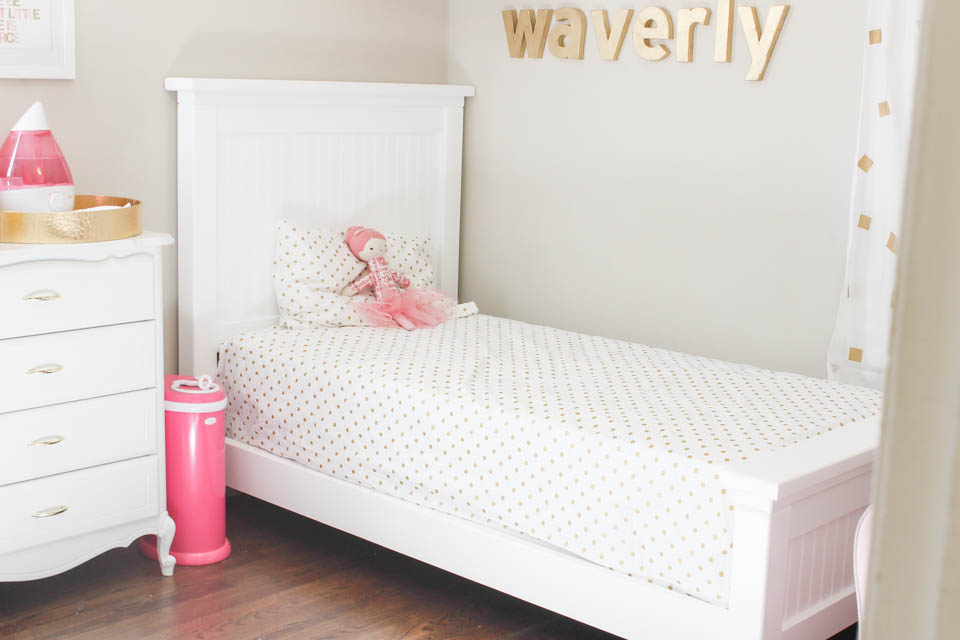 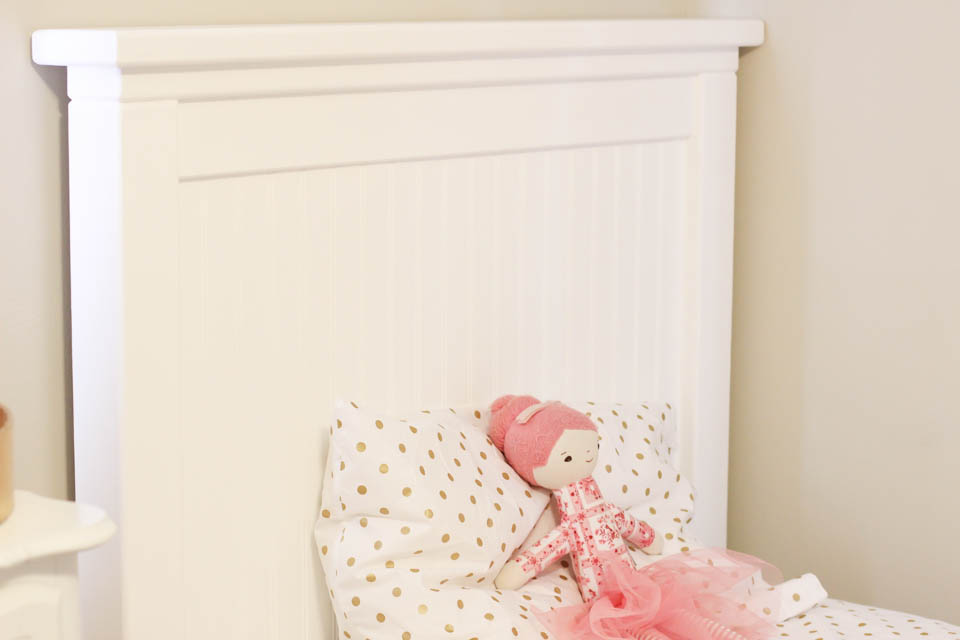 The sheets are from Pottery Barn Kids, we got them forever ago & love them, I had been waiting to be able to put them to good use!  I am currently looking for some sort of quilt or blanket & extra throw pillows as well, I love this pom blanket or something else with a pop of pink to match her room.  For now, we put extra pillows down her bed to make sure she is safe if she falls, but are going to look into these bumpers or something else like it for the future.  Waverly doesn’t move much when she sleeps, but I definitely want something just in case, this was the first time I have even been brave enough to give her an actual pillow or sheets (we used the breathable blankets before)!  So any other suggestions are appreciated! 🙂
And lastly, here is my first post on Waverly’s big girl room, with links to everything!  I hope this was at least a little bit helpful to someone, I know how much we relied on posts like this before we made the move!
XO