Even as I sit here and type in my living room (surrounded by baby gadgets, bottles, blankets, and an overwhelming sense of the color pink) … I can hardly believe that I have a daughter.  I am someone’s mother, and that someone happens to be a beautiful, perfect and all-around pretty amazing baby girl.  Today marks her one-week birthday, and there doesn’t seem to be a better time to make the official progression from my pregnancy blog to WORDS ABOUT WAVERLY – an official online record completely devoted to her.
After 10 months of pregnancy (I am still trying to figure out why it is referred to as a nine month journey … ), I was MORE than ready to meet my baby girl.  As I previously posted in my pregnancy blog, I really did enjoy being pregnant.  However, during that “tenth” month – every twitch, mild cramp, or food craving I had was attributed to the on-start of labor.  Needless to say, that was never the case, as my due date came & went as I was still sitting in the recliner in my living room with a rather large belly.  And although (as most preggers probably do) – I anxiously aniticipated the excitement of my water breaking in the middle of Target or waking up in the middle of the night with piercing contractions … I was perfectly content with the plan when my OB-GYN scheduled an induction for the Tuesday after I was due to give birth.
My husband and I walked into the hospital at about 8 PM on the day I was scheduled to recieve Cervadil overnight to help me dialate.  I had my bright floral suitcase and a huge smile on my face, already securing a place in my head for baby girl’s birthday for the following day.  I was clearly oblivious of what was to come.  I was immediately attached to multiple wires and pretty much tied to the hospital bed to monitor me and baby. The Cervadil did not work, so I was hooked up to Pitocin the following morning.  And although the IV did it’s job in jump-starting some pretty intense contractions, after multiple checks by several different nurses and a visit from my OB-GYN, I was still hardly dialating at all.  We finally made the joint decision to take me off the Pitocin and try again the next day, although I was still to stay in the same hospital room that I had originally thought would be a short pit stop before meeting my baby girl.
The following morning, I was instantly put back on the Pitocin. This time, the contractions were even more challenging than the day before, most likely even more mentally than physically as I was so frustrated from my apparent lack of ability to dialate, even after all of the pain.  I gave into the Epidural after about three hours that morning, and the relief it brought was more than welcomed.  However, as we said good-bye to nurse after nurse, as their shifts were changing, and had multiple updates of little to no progress, it was certainly clear that this journey was going to be a long one.  By 5 PM that evening, there finally seemed to be an end in sight.  A final check was set for 6:30, and with the most likely result of a continued lack of advancement, a C-section was our final route.
Our baby girl certainly seemed to have a mind of her own, and perhaps it was at this point that she decided it was finally time to make her fashionably-late debut..  With what seemed to me as a small miracle, that final check indicated I was 9 centimeters dialated and could push within the hour.  And although the final “pushing” stage of labor was what I had been most nervous about all along, the thought of an end to this 48-hour journey (and beginning of a new one with our daughter) was enough to motivate me.
I pushed for about 45 minutes and will never forget the experience, even though I don’t know that even just one week later I can recall the actual feeling of it all.  I know that my husband was right next to me the whole time and I couldn’t have done it without him, that the first time the nurse mentioned sight of my daughter’s head I was more determined than ever, and lastly, that any modesty I had ever had was out the window.
At 9:01 PM, Waverly Maye Brickner was born (7 lbs., 8 oz. & a full head of red hair!).  The entire process, starting at when we found out we were pregnant back in November to the last few minutes in the delivery room before she was born, was all a blur and all that mattered was that she was here.  From that moment … as my husband & I smiled at the sound of the lullaby playing through the hospital & the cheers from our family in the waiting room, while gazing at the beautiful baby that we had created … I knew that my life had new meaning and nothing would ever be the same.
In fact, I am not sure how life existed before Waverly Maye. 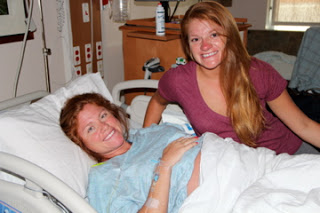 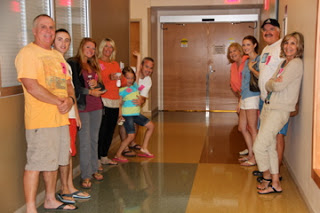 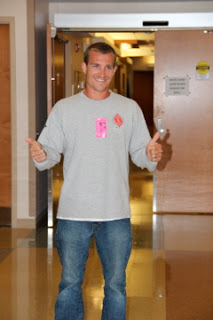 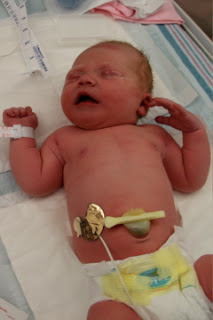 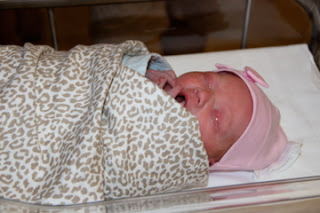