I will never forget, I was about 8 & a half months pregnant on one of the first warm days early last spring when we were at the park and I was pushing Waverly in the swing.  The guy next to me asked when I was due, he told me that his daughter (their second child) was almost a year old.  I asked him how having two was & he just looked at me, with the widest eyes ever, and said “game-changer”.  About fifteen minutes later, Waverly was going down the slide and a mom walked up pushing a double stroller, she asked me the same thing.  Her girls ended up being just about the same age difference that Waverly & Avalon are. She told me that the transition from one to two was the biggest shock of their lives, but not to worry, their youngest was about eight months and they were finally able to live life close to normal again.  Thanks.  I remember walking home with my huge belly, scared out of my mind, I pulled out my phone to text my husband to let him know that we were screwed.
Fast forward about five months to now, we are the parents to two healthy, happy girls, and I have to say, it’s been way better than expected.  Maybe it’s because I prepared myself for the absolute worst, or because the adjustment to being parents for the first time was such a shock in itself that this just doesn’t compare.  Either way, while we definitely we our moments & life is certainly not seamless, we are pleasantly surprised.  I’ve mentioned some of this before but thought it deserved a post all of it’s own, I hope it can be helpful to someone and if nothing else, I know I will love to back on it one day (probably laughing that I thought this was the crazy season of our lives!).
So the hard parts.  For us, the pure logistics of going from one to two has probably been the biggest adjustment, especially lately as Avalon is getting older and not sleeping all day long.  I have really been trying to get her napping at home, in her crib rather than in a car seat on & off, on the go, and that means attempting to get both girls napping at least close to the same time so if we have to go out (which seems to be the best for sanity!), we can do it when they are both awake.  The other day I had one goal, to go to Target (maybe I always have that goal?), and it literally took all day long to get us out the door.  By the time we were up, fed and dressed, Avalon was ready for her first nap, then after she was up & fed, Waverly was tired, and naturally, Avalon went down again right about the same time that Waverly got up.  We finally made it to Target at five PM (but we made it!).

Other challenges have been a lot of the obvious, double you know, everything.  And it always seems to be the case that as soon as I sit down down to feed Avalon, Waverly is screaming that she is sitting on the potty, just pooped, and desperately needs help.  There are so many moments that I wish for more than two arms, or maybe even better, that it was socially acceptable to drink a couple glasses of wine at 12:30 on a Tuesday (though that really wouldn’t matter, since I am breastfeeding & couldn’t really do that anyways!). 😉

Yet the good.  SO much good.  We really are much more confident as parents now, there is no doubt about it, & I’m sure that’s a lot of where Avalon’s laid-back demeanor comes from.  We have been fortunate that she is a good sleeper and just a good baby in general, but even when she does cry or have a night where she gets up more than usual, it just doesn’t seem to be as big of a deal as last time.  We know that she won’t hate the car seat forever, that the breast pump won’t always have to be with me at all times, and that at one point,  we will be able to sleep through the entire night again.  We know that these challenges are short-lived, that they will be replaced with others, but most importantly, that every single one is worth it.  I know other moms can relate, since the time I first started showing in my first pregnancy & almost every time I go out with both girls now, the first thing I hear (almost every day!), is how fast this time goes.  You really don’t realize it until your go through it yourself, but that really is the case.  This time, it’s so much easier to just let go of the little things that we know will work themselves out, what really matters is soaking in these precious moments with our girls, I still can’t believe how lucky we are to have TWO of them! 🙂  Double the hugs, kisses, and of course, double the love.  There is truly nothing better.

And what is a post without pictures?!  The first one makes me laugh so much, it shows the girls personalities perfectly, Waverly the threenager watching videos & talking to her “guys” on the phone, and Avalon just sitting in her bumbo smiling at the world, just so happy to be along for the ride. 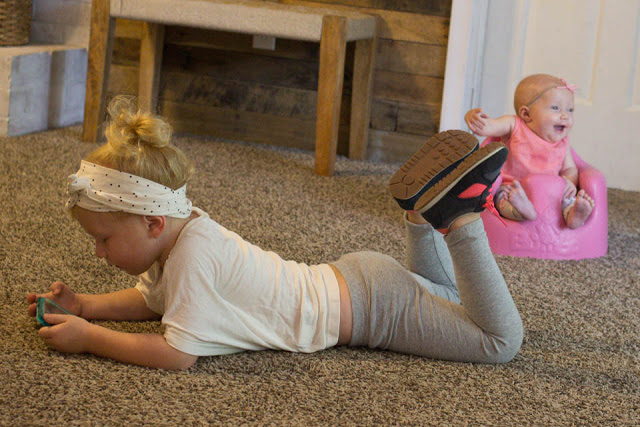 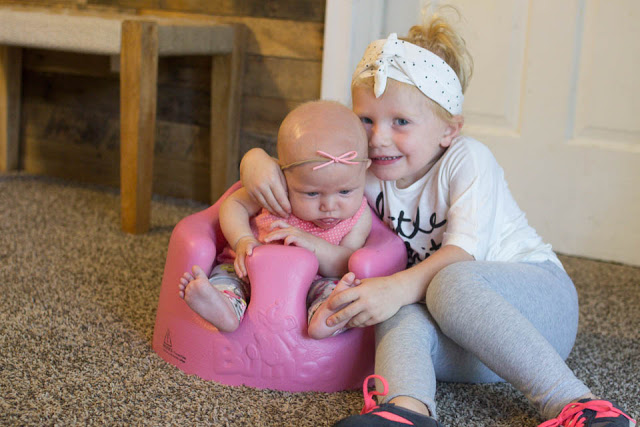 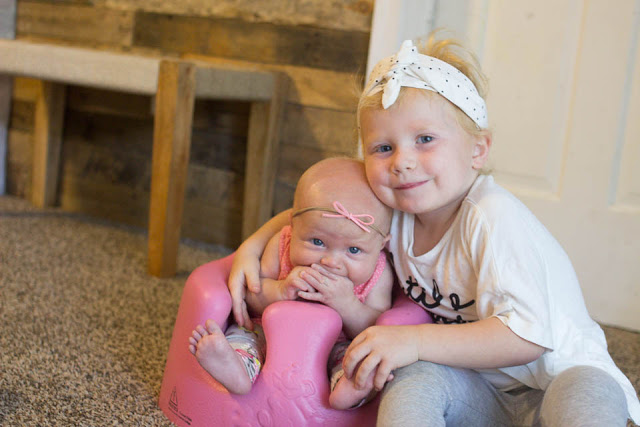 I would love to hear your own thoughts or experiences, or of course, if you have more than two & are laughing at me for thinking that we have it busy our way. 😉

And happy, happy Thursday! Hope you are having a wonderful week!  XO