Kicking off the weekend with some of my favorite things that our girls have been saying lately!!!  The last time I did a post like this (just a few months back), it was just about Waverly, but this time around I had to add Avalon because girlfriend has full-on sentences these days.  It’s so crazy, I swear she went from throwing out a few words here & there one minute to talking like a real little person the next.  Listening to them talk (especially to each other) is one of my favorite things, I just love their little voices so much, there’s truly nothing better! 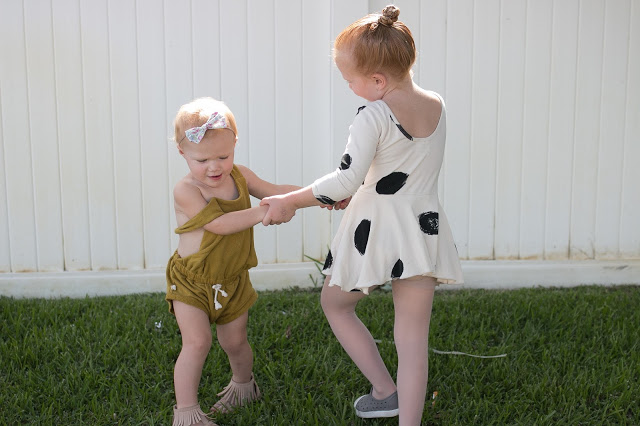 My husband and I met in high school, and the other day we were driving by the school we went to and I told Waverly that it was the place and daddy & I had met in math class, and she said, “oh, and then you asked him to live with you and put babies in your belly?”

Most nights when we have dinner we go around and ask everyone what their favorite part of the day was.  Waverly loves it (and usually answers right now, eating dinner with my family), and Avalon for the past few months straight has said every single time “the BIG SLIDE”.  Whether we went on one that day or not.  Then the other night Waverly said that her favorite part of the day was playing with her friend Grace at school, and then next for Avalon’s turn she said, “playing with Grace at school”.  Avalon doesn’t go to school and doesn’t play with Grace, but she wanted to be just like big sister.

Waverly was SO excited for Mother’s Day — loves any holiday just like her mama — and had been telling me Happy Mother’s Day for weeks.  Then the morning of, she came into my room and didn’t say anything for a little while, so when I asked her if she wanted to tell me anything she said “Happy almost Father’s Day”.  After I told her it wasn’t Father’s Day, she said, “oh, it must be Avalon’s birthday then”.  Thanks girlfriend.

For as long as I can remember, anytime that Avalon asks for a drink or a snack she always follows it by asking for one for sissy.  Every single time, it’s forever one of my favorite things.  Also are my kids the only ones who have assigned colors to their snack and drink cups?  Avalon has to have “pink” and Waverly has to have “purple”, their current favorite colors, god forbid I get it wrong because the world WILL end. 😉

I shared this on Instagram, but because I want to document it forever … the girls were playing upstairs in Waverly’s room while I was downstairs, all of the sudden I heard Waverly shout out, “Mom, do not come up here.  Something is going on”.  Exactly what every mother wants to hear.  I came up and my jewelry was everywhere (on them & the floor), but I’m going to chalk it up as a win since at least they decided to be honest and let me know.

The girls are starting to gang up on us, and it’s working.  If I put Waverly in a time-out Avalon quickly comes rushing over to her to console her, which usually turns into them laughing and being extra cute and making me forget all about what happened to get her there in the first place.  Avalon will say “sissy’s not nice but now she’s sorry”.  I mean, how do you even argue with that?!  Something tells me that we are totally getting a glimpse into their roles in the future.

And lastly, sorry honey, but I have to share.  My husband was getting into the shower the other morning and I heard Waverly scream “EWWWW!  It’s a —————–“.  Clearly we don’t have a lot of those at our house. #girldadproblems