Sharing some about this baby girl bump today, two more weeks until the third trimester officially hits!  That sweet middle spot of the second trimester is always my favorite, right before you are huge & uncomfortable (and peeing literally every thirty minutes throughout the night), but getting here also means we are closer to meeting her which still feels so, so surreal! 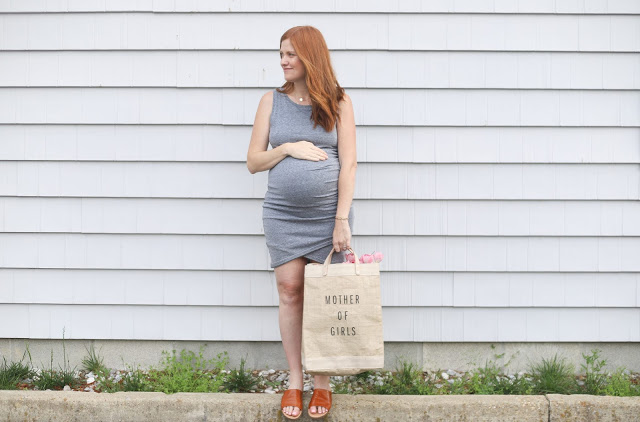 We had our fourth ultrasound of this pregnancy a couple weeks ago, this one was a follow-up to the anatomy scan since she covered her face the entire time and we also couldn’t get a good look at her heart.  This time I was determined to get her moving and ate a pack of pink starburst the hour before, which worked, we were able to see everything (she measured perfectly!) and also her sweet face!  She looks so much like Avalon, at least from the images we got, and was just precious with her little hands on the top of her forehead.  She is measuring a little small, in the 25% percentile, both of the other girls did as well and I’m completely good with that since I am two for two on being very overdue and induced, and am really hoping to go into labor on my own this time.  I know there will be less chance they will want to induce me if she isn’t measuring big, and am also 100% prepared to hold out for as long as I can (and that is safe for the baby), no matter how ready I am to meet her by the end!
She still has no name, we have a few that we like but none that we have completely agreed on quite yet.  We didn’t officially decide on Waverly’s name until we met her, and knew Avalon’s name the minute we found out she was a girl but waited until she was born to tell anyone.  This time around we also plan to keep it a surprise, even from the girls (who would tell everyone!).  I really love having one surprise since I’m too much of a planner to do the gender that way, and we also honestly don’t want to hear anyone’s opinions or thoughts on the name and know they won’t do that once she’s here. 😉  We haven’t started her nursery yet, but plan to in the next few weeks, we have the prettiest wallpaper ready for the wall where her crib will be and I cannot wait to start putting it up!  The two big girls will be sharing a room and then hers will be the room closest to theirs, even though it’s not even close to being started yet I love walking by it and seeing her sweet tiny baby things ready to be organized.
I am currently 26 weeks and have gotten the “any day now?!” comment twice in the past week.  Umm, actually no, 14 more weeks to go.  I really love my belly, bringing her everywhere with me and feeling her move all the time is just the absolute best and being pregnant will forever be one on the greatest joys of my life.  I mentioned in my last post though, this pregnancy has been hard on my body.  I struggle with how much to share without sounding like a complainer or ungrateful, but I also want to keep it real.  Pretty much every side effect that I could have, but didn’t in either pregnancy before, I have had this time, including most recently some major sciatic pain that has been debilitating at times.  It got really bad about a week ago, so much so that my husband literally had to lift me out of bed & up the stairs because I could not do it on my own.  Since then I have been seeing a chiropractor and wearing back support while at home, which has helped so much, I am already feeling way better!  Ultimately I am just super thankful that she is healthy & growing perfectly in there, I would obviously pick me to have the issues instead of her ten times over.
Our next big milestone will be the start of the third trimester, looking forward to sharing more as we spend our last few months before we are officially a family of FIVE!  XO

Leave a Reply to The Lucky Lifestyle Cancel reply