Aaaah, the day our sweet Remie Rue was born — along with my other girls birthdays, forever one of the happiest days of my life!  Her labor was probably the one I was most nervous and anxious about, plus also the one we thought would possibly end up in a C-section, and it actually ended up being my quickest, easiest, most-laid back of all three and the days since then have been the easiest transition as well!

I was induced with both Waverly & Avalon and both times had really long labors (48 hours for the first and 24 for the second), I took forever to dilate both times which was extremely frustrating.  Avalon’s delivery was also super scary, her shoulders got stuck on the way out and I didn’t even get to hold her as the NICU team was working with her for the first minutes of her life.  Because of all this, I was offered an induction at 39 weeks, mainly because my doctor wanted to avoid a C-section (as did I) and she thought the best way to do that was to make sure she didn’t get too big.  I REALLY did not want another induction after my first two experiences, of course I was going to do whatever was best for the baby but she was moving around a ton, my fluid levels looked great and she had been measuring small my whole pregnancy, so I felt confident waiting.  My doctor agreed to let me wait until 40 weeks, and scheduled an induction for the following Tuesday, the girls first day of school.  The day before the induction I just didn’t feel right about it, I was showing signs of labor (that I had never had in either of my first two pregnancies) so I still wanted to give my body time and also really hated the idea of missing the girls first day of school for a scheduled induction.  I texted my doctor and instead of the induction, the next day I went to labor & delivery for a non-stress test to check on the baby.  She still looked great, her heart rate was perfect and the fluid levels still looked good so the nurses there agreed, I could wait it out some more.   I was so uncomfortable and over it at this point — and SO READY to meet her! — but kept reminding myself of how far I had made it and that I was so close.

Sunday the 9th, nine days overdue, I woke up and did not feel her move at all, even after drinking two cups of cold apple juice and eating crackers — which was just not like her.  She was the busiest of all three girls in my belly, right up until the end and this was the first time my entire pregnancy I couldn’t get her to move by laying on my side and waiting.  We headed straight for the hospital, kind of freaking out the entire time, and were given another non-stress test once we got there.  She was fine, but not quite as active as she had been, and my fluid levels were getting low.  My husband & I both knew it was time, I had waited as long as I could and would never have forgiven myself if something had happened to her because I kept waiting — ultimately our priority was a healthy baby!

I was put straight on pitocin and almost immediately, it felt like both my other labors all over again.  The contractions were strong and painful, but my body wasn’t dilating.  After hours with little to no progress, we decided to do cervadil instead overnight, to see if it would help me dilate.  I hardly slept and was super uncomfortable with contractions all through the night, but just hoped that meant my body was finally doing something.  They checked me the next morning, and for the first time ever, I had dilated from the cervadil to a two.  Which for me, was huge!  I went back on a small dose of pitocin and this time, the contractions were stronger, closer, and were actually making me dilate!  I made it a couple hours before the epidural, and once I had that, was able to relax and was getting sooooooo excited to meet her soon.

The next hour or so was actually really laid-back and peaceful (I will never know how anyone ever does it without the epidural), and before I could even process how quickly everything was going I started feeling major pressure — I had dilated to a ten!  I pushed for about FIVE MINUTES and there she was — perfect and healthy as can be, in my arms and with no complications.  She had a head full of dark hair which was just the craziest thing ever to us, the same bright blue eyes that both her big sisters had, and the sweetest, daintiest little features that were all her own.  It honestly felt like a dream, the happiest dream, which was so very fitting after nine months of a surprise, surreal pregnancy with our third baby girl. 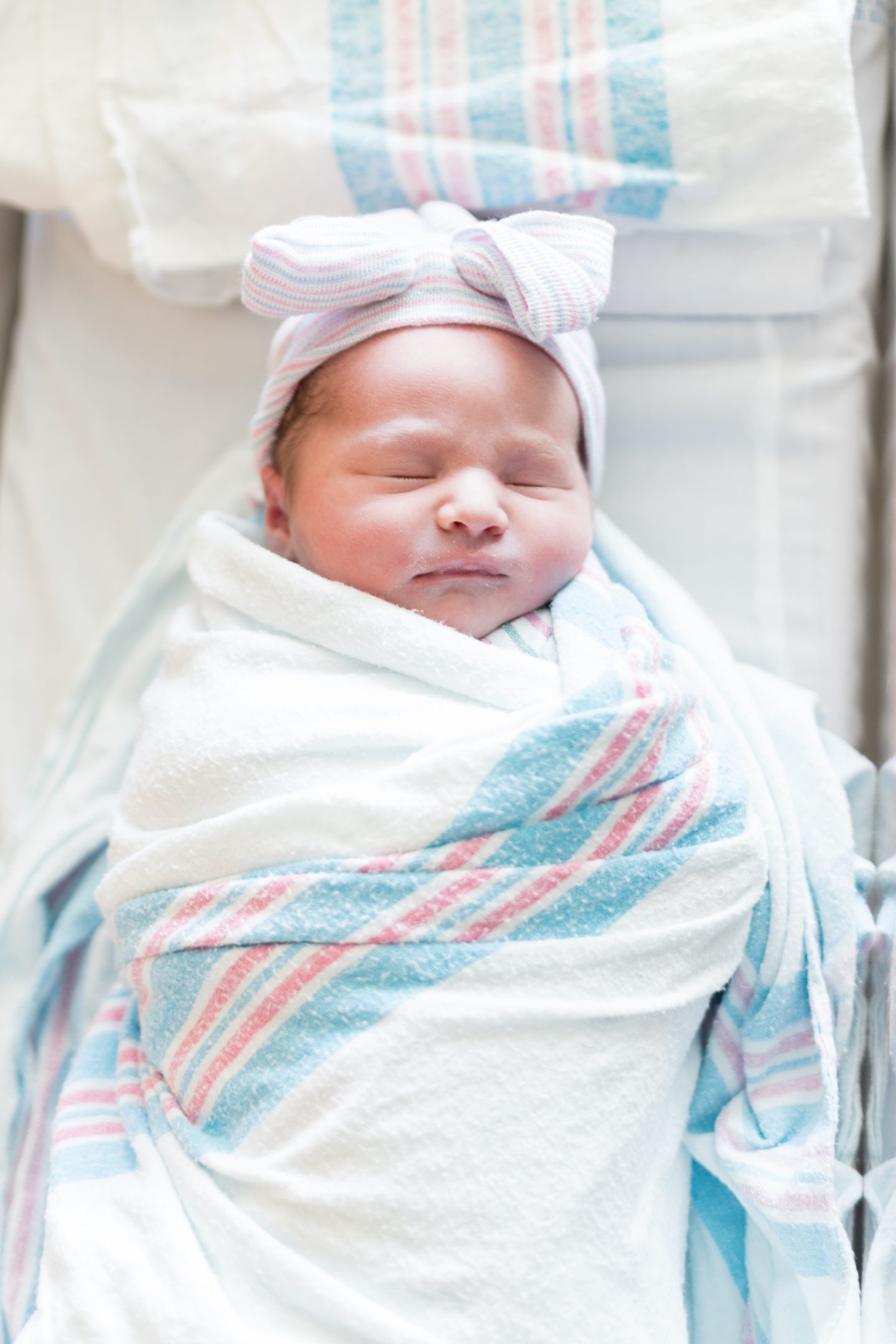 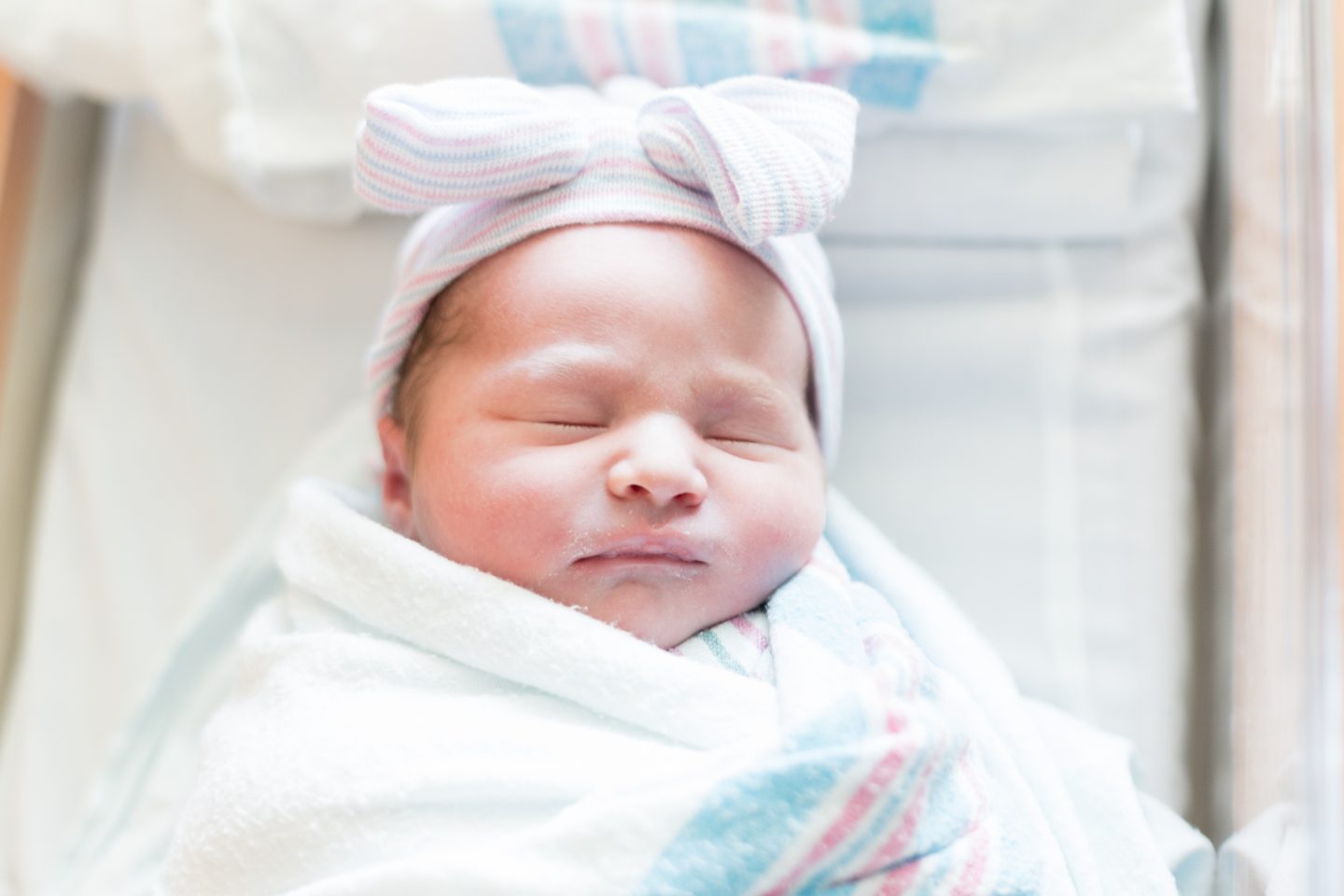 I was up, walking and feeling great within a couple hours and have had a really seamless recovery since then.  Feeling grateful for that and of course most of all, for our Remie Rue!!!!!!!!!!!!  We love you, angel girl and cannot believe that you are ours forever.

PS — I promise to share the story of her name soon, along with some pictures of the big girls meeting her for the first time which was hands down just the BEST!  Thank you again for all your support and sweet comments for our little girl gang, we are forever thankful for your support and love!