First, let me preface this by claiming that Waverly is not completely potty trained yet.  We (because I definitely consider both of us part of this process, probably even me more than her), have a really good start & I am ecstatic to say that I do think this will be a 100%, permanent thing soon.  Yet we totally have some more work to do, I just thought it could be helpful to some of you to share what has worked for us so far.  I also felt I owed it to the blog world, since I relied on so many potty posts over the last few weeks (which helped save me at least some sanity). 😉

Waverly has always been really interested in the whole bathroom situation in general, so starting around 18 months we went & bought a potty to at least get her familiar with it.  It basically was only used as a place for her to throw her toys in or to accessorize on top of her head most days, but every once in a while, I could get her to sit on it to watch Sesame Street or read a book. 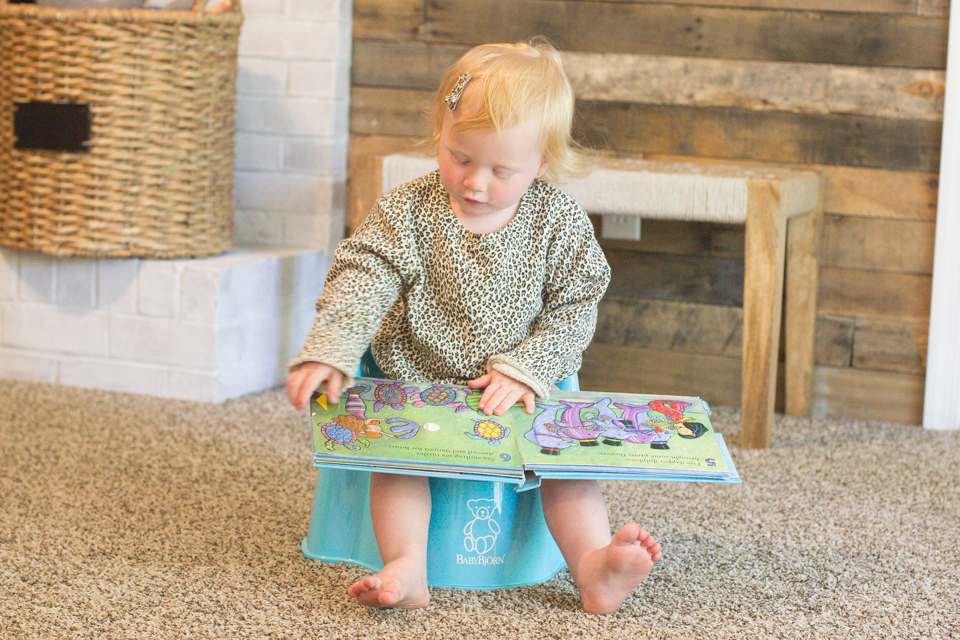 My goal was to really focus on it this summer, since most of what I read said that warmer weather is better (less clothes) & for us, that made the most sense since I was off school & could be consistent.  Fast forward to when summer really came, I kept putting it off until randomly a few weeks ago, I looked over & Waverly was sitting on her potty “doing her thing” for the first time ever.  I was over the moon excited (I’m pretty sure we called every contact in my phone to share the news), & immediately decided to start the three-day boot camp the next day.

Call me naive, but I was totally not prepared (like at all) for how hard those few days were going to be.  I’m even willing to chalk this one up (right up there with breastfeeding & maybe even sleep-training), as one of my most challenging parenting experiences to date.  I certainly don’t want to scare anyone because obviously, every child is different, but for us, it was a very rough start.  I took the tips & let her go pick out her big girl underwear, got the treats & the stickers, but what I forgot was to mentally prepare myself for the amount of mess (& frustration) that was to come.  I guess I was expecting magic but instead I got the opposite, Waverly went to the bathroom everywhere else besides the potty for most of the first day.  By naptime (which was right after I had run out of paper towels from all the clean-up & was bent down pulling the treat stickers out of Waverly’s girl parts (which was about the only thing she had interest in with the whole process!), I called my husband & mom to let them know that she wasn’t ready, she was still too young, & that we were giving up to go to the waterpark.

Then she woke up & immediately asked to go to the potty, which she did … IN the potty for the rest of that afternoon & night.  Everytime, we would do a song & dance, get a treat & call daddy to share!  Apparently something had clicked, she was really, really proud of herself, & could not stop smiling every single time she used the potty. 🙂 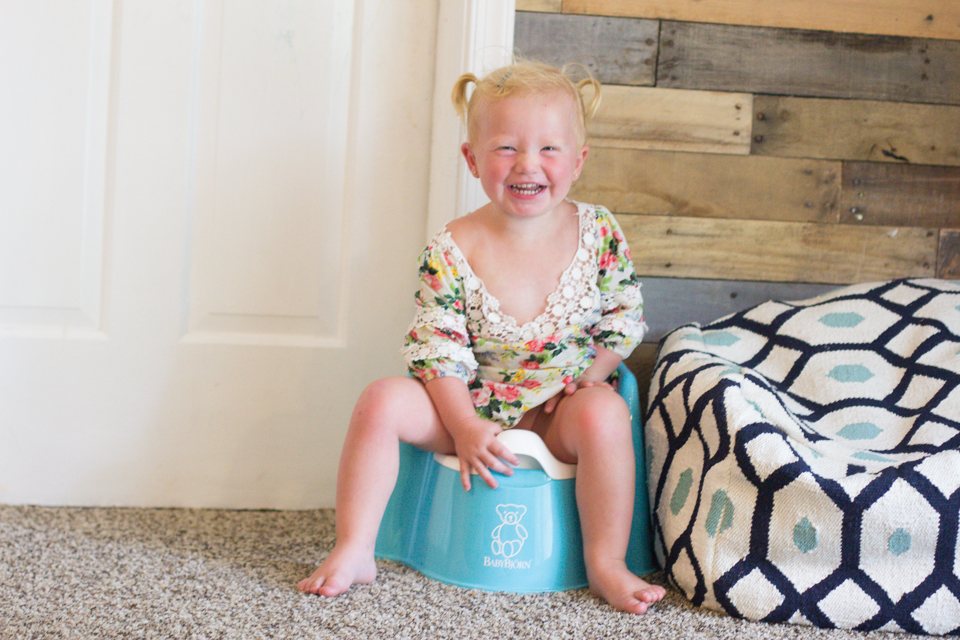 We did stay home for the next two days & during those, still had lots of accidents, LOTS of frustration, but also, lots of successes!  They definitely were not my favorite parenting days ever, but somehow we made it through & for that, I felt accomplished.  I really think part of the biggest challenge for us was actually staying home.  We are usually on the go so much that Waverly was not only adjusting to getting rid of diapers, but also, to only me & the dog to entertain her.  It clearly made her less impressed & she was stir-crazy about an hour in. Yet staying home is also the same thing that I think pushed her over the edge to actually understand the concept, so I really am glad that is the route we took.

Since then, for the most part, when we are home she will use the potty. Waverly still gets the biggest, proudest smile every single time she has a success & obviously immediately asks for her treat!  With that being said, it is still a challenge to get her to pull her underwear down so we spend a lot of our time at home naked (or she does). 😉  So our focus right now is to master the whole underwear thing & obviously, also to get her trained when we are not at home (we ordered this portable potty to help with that!).  I definitely don’t expect any of that to happen overnight, but really am so very proud of her & how far we have come!

I am hardly an expert but my best advice would be to prepare yourself (where I totally failed) & to remember that even if it doesn’t feel like you are making progress, you probably are.  Also, while you are stocking up the undies & treats, get some wine for you.  I don’t know how you could do it without it. 😉

Have the BEST weekend, everyone!!
XO