I realize that it sounds completely crazy for someone to be happy at a hospital … ﻿especially when that someone is me, a girl who hates needles, blood, and pretty much anything to do with the medical field.
But these days, as previously posted, my thoughts/hobbies/priorities are certainly evolving … and  my desires to visit the doctor are no exception.  I have found myself actually looking forward to my doctor’s appointments, at the direct result of an opportunity to get a glimpse at our little bean and also an update on her progress.  And lately, Mr. BB & I are actually voluntarily visiting the hospital (in which we will deliver!) each Thursday night to attend a birth class.
Last night’s class was one we were both extra excited for – as it was the night we got our of the birthing center at the hospital.    THE hospital that we will welcome our little girl at in less than two months.  It definitely made it feel more real, especially when we saw two newborn babies who had come into the world just minutes before in the nursery.
Even though there are lots of “to-do’s” to check off my list before the REAL trip to the hospital will take place, it is safe to safe that I will definitely be happy to be at a hospital that day.
Truthfully, I would have gone to see this movie whether or not I was one week shy of being 8 months pregnant.  In fact, I would have even considered it to be “theatre-worthy,” rather than just as a renter.  But just as the movie “Bridesmaids” was released last year during my wild bachelorette weekend, “What to Expect While You Were Expecting” debuted with perfect timing in my own life and thus –  Mr. BB & I spent our rainy Sunday afternoon peering into a glimpse of our own current reality.
Prior to being with-child, it really is hard to imagine what it is like.  And not that I know from firsthand experience, but most moms recount that no two pregnancies are very much alike.  But nevertheless, for a girl who has recently encountered symptoms that she had previously not even thought about … it is comforting to see that other women are going through/have fairly similar stories.  (Such as – the feeling of ALWAYS being hot, so hot that you really would be ok walking around naked, belly & all … waves and waves of new hormones that cause your emotions to be up & down with no predictions in between … and the sad reality of peeing on yourself because it is just something that you can no longer control).
So yes, I enjoyed the movie.  And if only I could look like Cameron Diaz for the remaining 2 months of this pregnancy … I would be even more content.
There are MANY aspects of pregnancy that I was not even close to being aware of ﻿until the past 7 months.  I admit that I could have listened more intently in my Health/Sex Education classes during school,  but probably had other important things on my mind … such as the cute boy sitting across the room or the prominent thought of what I was going to wear to school the next day.
(I should teach my daughter to be better than I was.)
Nevertheless, I am the first of my close friends to be “with-child,” and so I am the guinea pig of the group.  And they are definitely lucky, because I like to write and could definitely write a full-detailed book on some of the new life experiences I have recently faced.  One of those being my recent glucose test to determine whether I had contracted gestational diabetes since becoming pregnant.
As you might have guessed, although I was fully aware of diabetes, I didn’t even know women in pregnancy were more prone to it or that I had to be tested for it before my 28th week.  Furthermore, I certainly didn’t expect to (yet again) be poked and prodded with a needle, to be asked to drink a highly sugary drink in less than five minutes, and (TO TOP IT OFF!) – not eat eight hours before or the hour you sat there after.
But … it’s all for my little girl.  And so, just as the previous tasks that I have been subjected to since finding out the big news in November, I (obviously) had my husband come along for moral and emotional support – and headed to Virginia Beach General Hospital with a smile on my face.
The bad news?  The hour was pretty brutal.  An empty stomache BEFORE pregnancy was not ideal for me, and DURING pregnancy – pretty much unbearable.  And since I lost my sweet tooth with the arrival of a baby in my belly, a sugary drink + no food = NOT FUN!
But the good news?  Mr. BB took me to Beach Bagel immediatly afterwards for one of my recent favorite snacks, a yummy, toasty, egg & cheese bagel.
And the BEST news?  My doctor called two days later to inform me that I PASSED and will not be subjected to the three hour test.  CAN YOU EVEN IMAGINE?
I am certainly one fortunate girl to be surrounded by many family & friends … ones who have really celebrated some pretty important life moments over the past couple of years.  All of these occasions really become that much more special when they are shared with those people around you.
Last weekend, Little Miss Brickner and I were showered with love at our first of two shower﻿s before she arrives in July.  And there definitely wasn’t a shortage of feminity, either.  As every baby shower for a little girl should, there was lots of pink, florals, and some pretty precious outfits for her to adorn soon.
THANK YOU to two of my best friends, Sara & Niki … for hosting the perfect shower and for celebrating this special time with me.  Little Miss Brickner loves you both already and feels lucky to have you, and the rest of the girls, too. 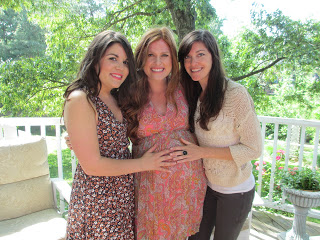 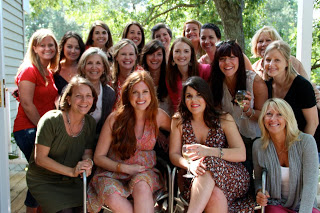 It’s official.  I am one day away from being 3O WEEKS PREGNANT … which in other words, translates into:  In exactly 7 weeks, the baby girl developing in my belly will be fully formed and able to enter the real world.  And then, I will be a real-life mom.
A mother … someone in this world will have that moniker for ME!
The farther along I get, the more I realize why a full 9 months are a necessary time period for pregnancy (I mean, other than the obvious reasons for baby.)  It takes at least that amount of time to completely grasp the fact that an actual human being will result from all of this.  And actually, I don’t even know that (especially for a first-timer!) the realization hits then.  There have been definite enlightening moments … such as when I walk pass her nursery with the crib lined in pastel pink sheets, the sight of her stroller now placed in the center of my living room, or the constant kicks and jabs that I love to feel now on an hourly basis … but most moments the day, it is such an exhilerating while foreign thought that it’s pretty unbelievable.
So this Sunday marks the first Mother’s Day that I will celebrate with the thought of my own daughter in mind.  Because, really, I already now am a mom … as my daughter just jabbed my right side and reminded me.