Happy Friday, friends, I hope you all have had the most wonderful week!  The bigger I get during these last few weeks of pregnancy (& bigger is definitely the word, the term ready to pop is more relevant than ever right now), the more I am looking to keep Waverly entertained in a way that doesn’t require too much physical activity from me.  My sciatica is tons better since starting maternity leave, & I’m usually all about being active as much as possible, but let’s face it, I am currently tired walking up the stairs.  So keeping her happy while keeping me sitting is the name of the game, & I’m not ashamed to admit it.

Thankfully the weather has been warm, or even hot, & we have been able to spend lots of time outdoors. Waverly adores any activity that involves water, she always has, & it will usually keep her busy longer than anything we do inside will.  This past Monday was a wash-out, it rained on & off all day, but it was still warm enough to go outside in between rainstorms to play in the puddles so we took advantage.

Two things, (1) our neighbors think we are crazy, for some reason we were the only people on the street doing this, & (2), if only I could pull off a bathing suit & hunter boots like she can. 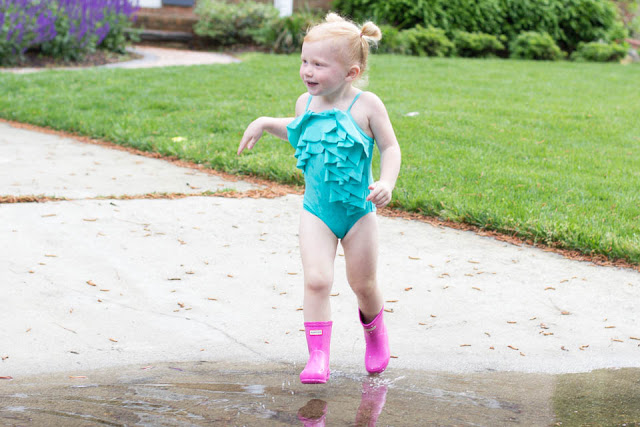 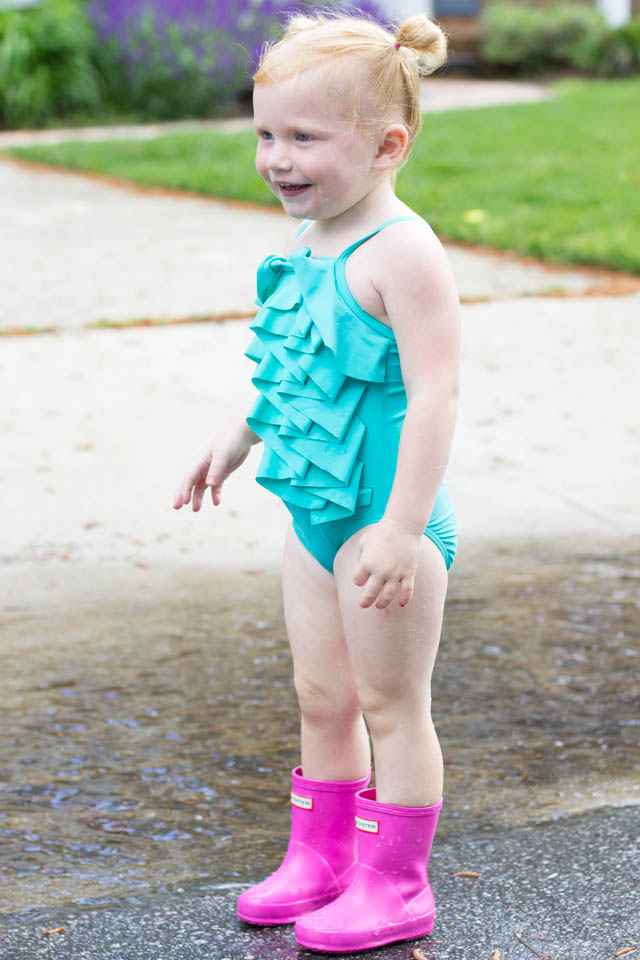 We also pulled out the old faithful kid pool from last summer, which I am convinced is the best $10 we have ever spent.  We have used it three times this week alone, between that & the sprinklers that run every morning, we have had hours of endless entertainment. 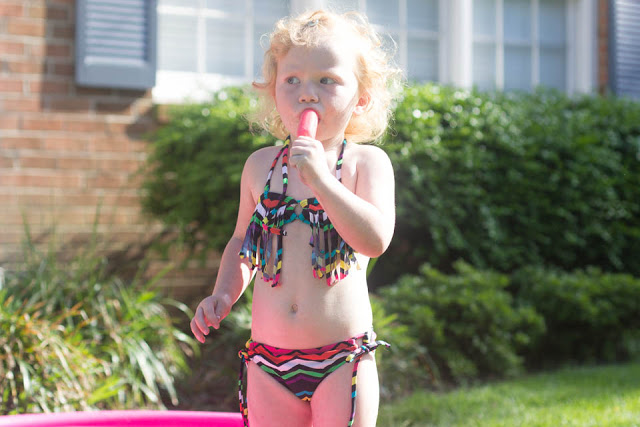 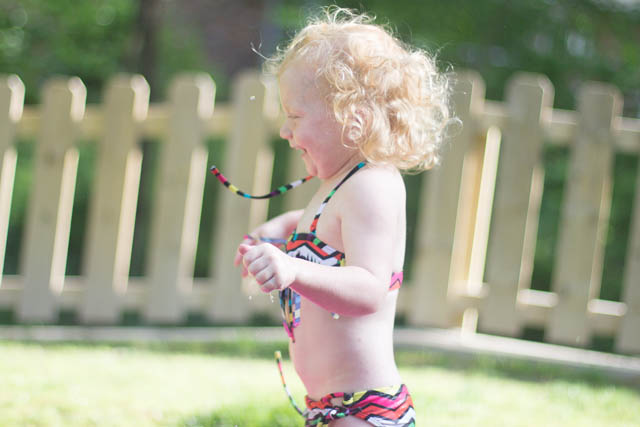 We have all of our maternity pictures back & once again, my sweet friend Brooke rocked it & I am in love with all of the images she captured of us! 🙂  I am really excited to post some next week, but in the meantime, I thought I would share another sneak peek, this picture was definitely not one I had envisioned in my head or that I pinned before our shoot, but honestly, has been the one I have come back to look at the most. 😉

And the story behind it.  While we were driving to the pictures, Waverly asked me if she was wearing a bodysuit, which was so random & weird, I couldn’t figure out what she was talking about.  After she kept going on about it I finally realized that she was asking if she was wearing a bathing suit because I had told her we were going to the beach, & girlfriend was planning to jump in the water when we got there.  OMG.  It was unseasonably cold that day, almost to the point that I was nervous about us even doing it, so the last thing I wanted was for her to jump in the water (not to mention the fact that we were going for family pictures, not a wet t-shirt contest).  I was luckily relieved when we got there, Waverly was having so much fun running through the sand (& we were able to get tons of pictures of her in it), but it was cold enough that she didn’t have much interest in the water.  Or so I thought.  After a while, we put our toes in & were running through it some, when I looked over & Waverly got just a little too brave, went too far, and got knocked down by a wave.

Seriously, my mama instinct kicked in & I freaked.  I mean, my face.  I don’t even remember Brooke taking that picture but now that we are out of the moment & Waverly is fully recovered (she was laughing before my mom even made her way up the beach to take her back to the car), I admit it, I know we will love having it forever.  I can’t even wait to laugh about it with her one day. 🙂

PS – If you have never searched “family photos gone wrong”, do it.  We did on the way home (since we felt like we have a contender for that now), they are hilarious.