My husband is the kind of person who would rather make anything than ever buy it, something I love so much about him.  It also drives me crazy.  At least once a month I bring something home & he tries to send me right back with it because he is convinced he could do it on his own, and better.  Which he can, and will, but you better believe I’ll be waiting at least three more months for it, because he’s such a perfectionist he is going to be make sure every detail is perfect.

In the meantime, can’t I just buy out the home decor section at Target???

That was totally the case with this bed.  It was my Christmas present a couple months late, he worked so hard on it every night after the girls & I went to bed and was so excited to put it in our room come February.  Per usual, the wait was more than worth it, I LOVE it so much and most of all, love the fact that it is meaningful and something we can have in our home forever. 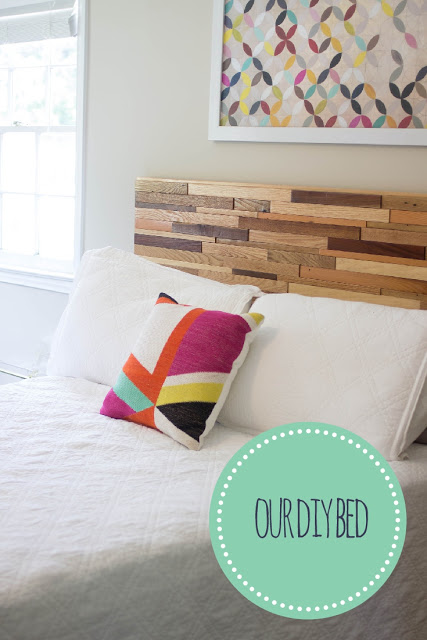 I knew I wanted something wood with a bit of a rustic feel, and also something that was timeless, and I think he nailed it!  Literally. 🙂  I only asked for a headboard but he ended up adding a matching footboard as well, which might even be my favorite part!  I’ve asked him to summarize what he did to share here, the steps are below.
1 – To get the measurements for the bed frame, he used our old one, which was also wood and about the size of what we wanted.
2 – He cut the inlaid pieces first, which are all just randomly cut wood pieces from other house projects that we have done.
3 –  The bed frame, headboard frame, and footboard frame are built out of fir, bought at a specialty lumber yard.
4 – He glued and screwed a piece of 3/8″ plywood to the frames, then started gluing & toenailing all the pieces to the headboard and footboard.
5 – He used a router to install these brackets to connect the bedrails to the headboard and the footboard.
6 – He bought 1″x4″ common boards from Home Depot to span left to right of the siderails, which is what supports the boxspring and mattress.
7 – After everything was built, it was finished in a heavy coat of lacquer. 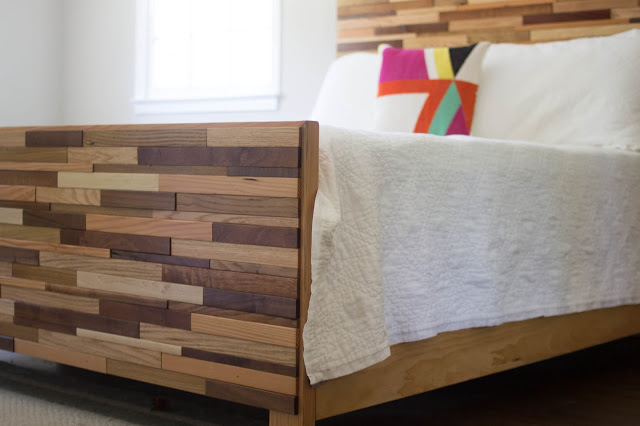 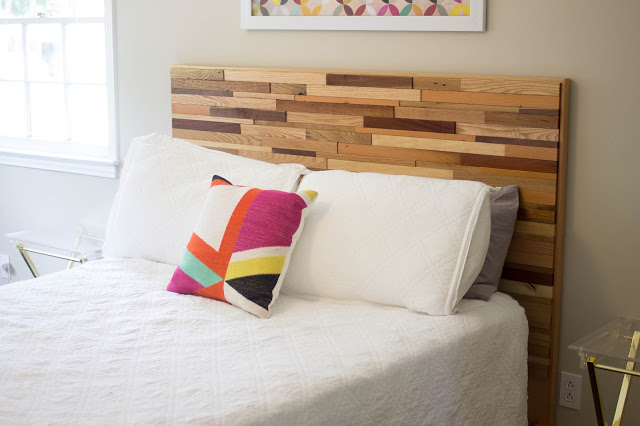 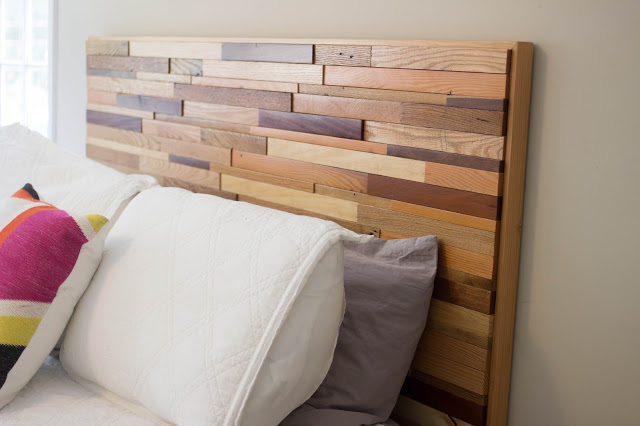 With the start of fall coming, we are itching to start some new projects and hope to be sharing some soon!  And happy weekend, friends!
XO