Happy November!  Three days into the new month and we are finally (attempting) to get out of our sugar shock and recover from the holiday.  Monday was TOO much fun, both girls are at such good ages for trick or treating and loved it, it makes me sad that we have to wait an entire year to get to do it all over again!

I had to work in the morning, which meant I had to miss Waverly’s Halloween party at school, but luckily my mom was able to take my place & sent me lots of videos from her mask parade.  Waverly loves school so much, I was excited that Halloween fell on one of her three days a week so she could celebrate with her best girlfriends.  The night before I got some treats together at the girls little table to make their afternoon extra fun and exciting, so thankful for a schedule that allows me to get off early to still have those moments with them!  My husband also surprised us by coming home early, and the girls loved setting some decor up in the yard with him before it was time for costumes. 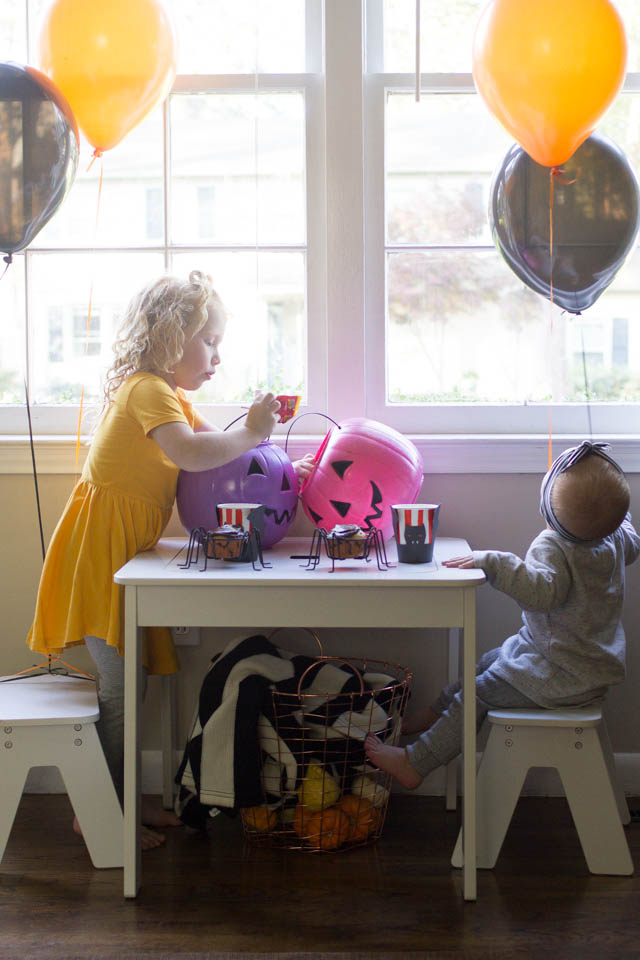 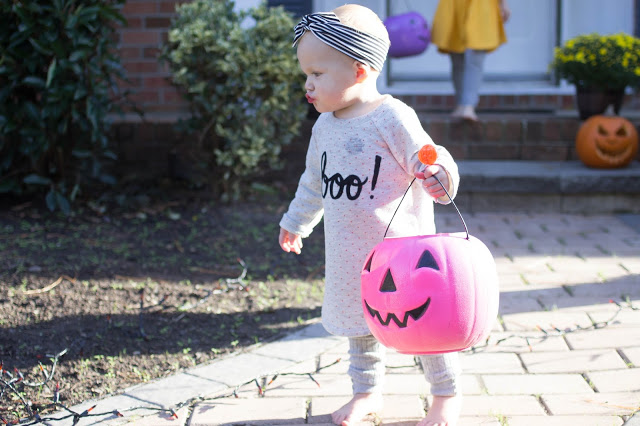 We were randomly at TJ Maxx at the end of summer and saw the cutest pig costume, Avalon loved it when we tried it on her and we knew it would be perfect for her second Halloween!  So funny, she is going on seventeen months this week but I bought her a 12 month then because it was big on her at the time, and it was still huge on her two months later.  She is tiny but fierce! 🙂  I gave Waverly a few weeks to decide what farm animal she wanted to be, and promised her she could be a princess the week before.  We went through tons of costume ideas online and loved this chicken one we found, so ultimately she was really excited to wear it, especially when she realized we were going to dress up as well.  My mother-in-law made the entire chicken costume, she has done Waverly’s costume since she was three months old and is so, so amazing at it!!!  She worked so hard and it came out so perfect, here is the tutorial she used, we are forever thankful for her talents.  I always have visions of what I love but am seriously lacking when it comes to creating these sorts of things. 😉

Waverly is obsessed with dogs in general, we have a lab & my parents have three little dogs, so just about a week before Halloween we thought it would be fun to add one of them to dress up as well.  We couldn’t find one big enough for our dog, but my mom found the cutest sheep costume for her dog Miley, and Waverly was SOOOO excited that she got to join in on the fun. 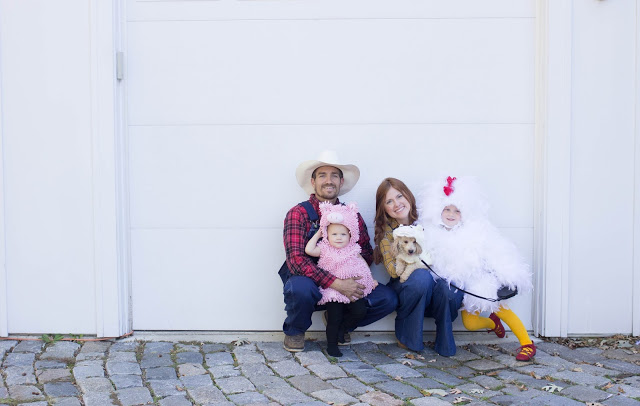 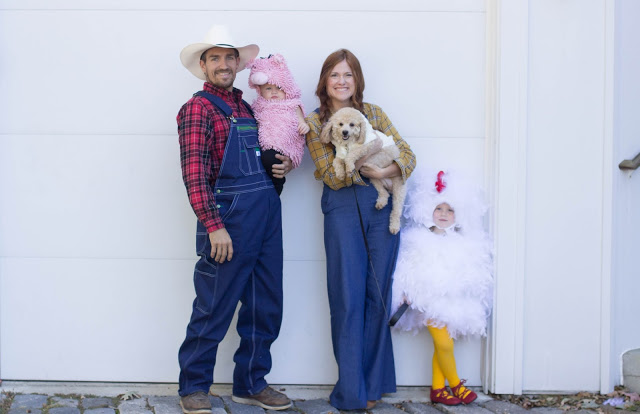 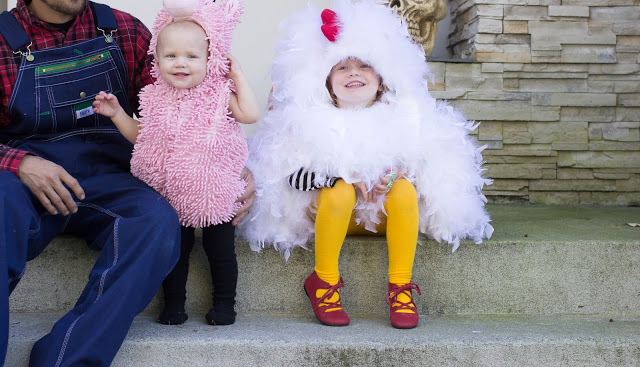 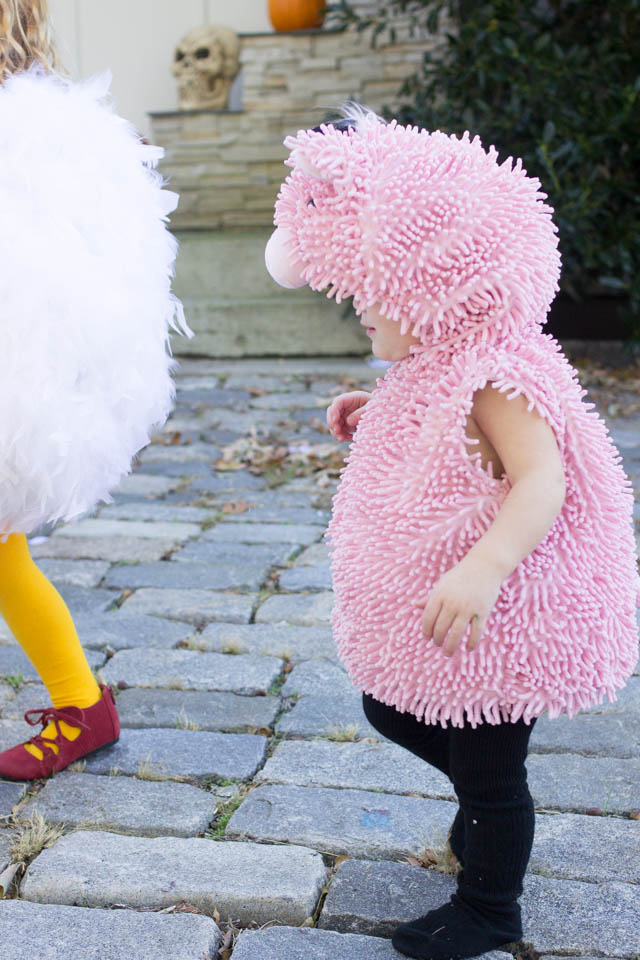 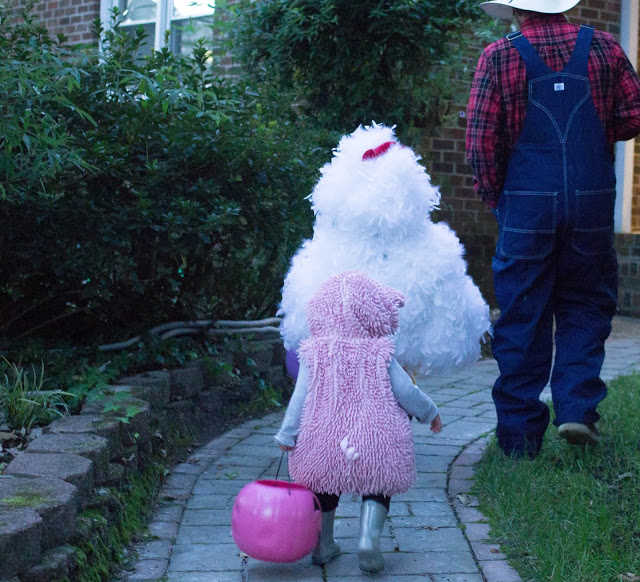 Things I never want to forget from this Halloween.  How Avalon was walking along, with her pig head hanging halfway over her face, trying to be such a big girl grabbing at least four pieces of candy from each bowl.  She has such a sweet tooth, I’m convinced this will forever be her favorite holiday, I just couldn’t say no to her sweet face looking up (with pig ears) saying “peeeeease” to a 100th piece of candy.  How Waverly was so excited to be carrying Miley on the leash, and how she introduced her sister to almost every house, so proud that they had dressed up together.  After trick or treating some, Waverly decided she wanted to hand our candy for a while, and her face LIT UP when one of the kids from her class came to the door.  It was such a magical little night.

Hope your holiday was perfect, I have loved seeing everyone’s pictures & posts this week!
XO