Happy halfway through the week!!  I’m stopping in to share a favorite post from another mommy blogger, Stephanie from Honestly Mommy.  Her post is about taking pictures with your kids, something I know we all can relate to, we all want good pictures of our kids!  Enjoy! XO 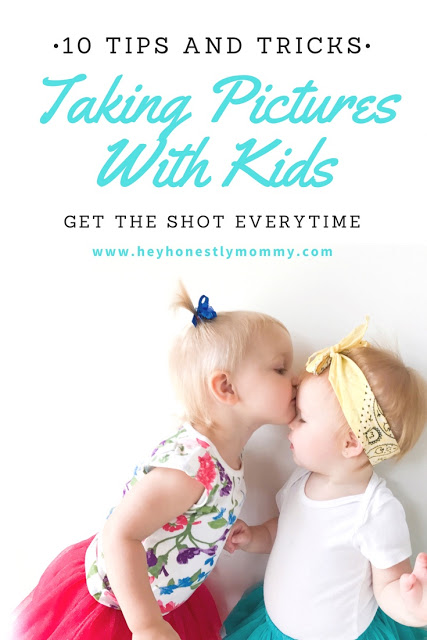 10 Tips for Taking Pictures with Kids!

How to get the shot and keep your head while doing it.

Being a Social Media Mom is hard; taking pictures with kids can be one of the hardest parts of the job. But obviously, since you’re a mom, people kind of expect to see pictures of your kids on your feed…Makes sense right? But how do you get the little buggers to cooperate long enough to snap that coveted photo?
If you’ve ever tried taking pictures with kids then you probably know it can be frustrating for all parties involved. I used to find myself up tight and stressed during photo shoots because I was never sure how to get my kids to cooperate and make sure I got a nice photo. The more I incorporated my kids into my photos, the more I began to learn and after each shoot that went well, I’d catalogue another tip or trick to try the next time around.
Luckily for you I’ve learned a few Tips and Tricks for Better Photos during my journey into Social Media Motherhood, and I’m willing to share my secrets for taking pictures with kids! I hope these tips will help you get the shot you’re looking for!

10 Tips for Taking pictures with Kids

#1 Don’t push them to do something they don’t want to do. If they’re not in the mood it’s easier to just wait until later, trust me. I’ve done way too many photo shoots that I’ve insisted on when my kids are crabby and it just ends up with all of us being grumpy and frustrated; and usually doesn’t result in very good photos.
#2 Always be ready! How often to you set your kids up, they flash you that prize winning smile, but you missed it because you’re fiddling with your camera of trying to swipe left on your phone to open your camera app? Something I learned awhile ago is to have your camera on/open and ready to go as you’re setting your kids up. Kids have a very short attention span so don’t waste time prepping while they’re already posing.
#3 Invest in a tripod and remote shutter. This has revolutionized my picture taking! I used to have a camera with a self timer and spent many a photo shoot running back and forth to hit the button only to realize later that I wasn’t in focus because I joined the photo after the camera had already focused on the group -double ugh. About 8 months ago I invested in a tripod that holds my iPhone and a remote shutter that links via blue tooth, now I just stand in front of the camera and click away.
#4 Don’t be afraid to bribe or reward. In my opinion, there is nothing wrong with telling your child you’ll get them a small treat if they agree to take a few photos with you. I don’t do this for every shoot, but I like my son to know that when he does the things mom wants to do (i.e. taking photos or going shopping) I’ll do the things he wants to do like go play at the park.
# 5 Always praise your kids for a job well done! My son is 3, and he fully understands when he’s being a bit of a stinker or cooperating well. He beams with pride after every shoot when I tell him how fantastic of a job he did. I have even started showing him a photo or two and saying things like “wow Zeke! Look at your smile!” or “look how nicely you kissed Cici!” I think when you bring attention to the way that you want them to pose and how well they did, they’re more likely to do it again in the next shot.
#6 Plan your photo shoots with your other outings. Very rarely now days do we get all dressed up just to take photos; I plan ahead on church days or other similar outings when I know we’ll be dressed cute and just take a 5 minute pit stop on the way to where we’re going. This has made it so much easier to sneak in photo shoots without taking extra time out of my day!
#7 Tell your kids ahead of time. If I know I’m planning on taking photos that day, I usually talk it through with my son at the breakfast table. “So today we’re going to take a bath after breakfast, get dressed, and then on the way to grandma’s house we’re going to stop and take a few photos, does that sound good?” To which I usually get a peppy little “yep!” I have found that when I give my son a heads up and don’t just spring photos on him he’s a lot more willing to cooperate.
#8 Know when to quit. (This is a big one!) Again, kids have a short attention span, so when they’re done, they’re done. Don’t push photos too long or you’ll end up with crabby kids who start to hate photos. Also, even if you’ve just started a shoot and it’s not going well, know when to quit! I am playing the long term game and want my kids to like our photo shoots, so if it’s just not working that day I’m quick to say “that’s alright, let’s be done.”
#9 Another bonus of having a remote shutter is that you’ll get countless candid shots and it helps with tip number 2; I start clicking before I am ever in front of the camera or have the kids set up. Sometimes it’s fun to get those in between shots of us talking, laughing, or me prepping the kids. More often than not I end up using the “candids” over the straight on smile and click photos.
#10 My biggest tip for taking pictures with kids is to just go with it; whatever mood you find them in, see if you can capitalize on it. Sometimes my daughter is pulling out all the sass and instead of trying to get her to calm down, I tickle her, tease her, and actually try to bring out the sass a bit more. When my son is grumpy and doesn’t want to take part in photos, sometimes I’ll try to capture the grumpy face too because it can be just as cute as a smiling photo! Also, usually I hold my daughter and let my son stand, but during one photo shoot we did recently he was begging to be held and she wanted to be down, so I let them orchestrate the photos and I did what they wanted.

Taking pictures with kids can be easy and fun when they start to get used to them and know that they will potentially be rewarded for a job well done.

My one year old daughter is so accustomed to photo shoots that when I ask her if I can take her picture she goes and stands up against a wall to “pose” -it’s the cutest! My son also has started to love our little photo adventures and has begun asking me if he can take the photos now too.
Incorporating my kids into my life work has been so fun and rewarding and I have endless amounts of cute photos to add to their baby books! With just a little bit of forethought, taking pictures with kids can be easy and fun for everyone involved! No more stress wondering if you’ll get the shot, just confidence that if it doesn’t work out this time, there’s always tomorrow!
If this article helped you, please share it with others through Pinterest of Facebook (simply click the appropriate link at the top of the page)! Other mommies (or daddies) might enjoy these tips also, and of course it would be greatly appreciated by yours truly 😉