This has been a monumental week in Waverly Maye’s world.  The big news?  This little lady officially has a tooth.  It’s for real this time.  We can actually feel it & see it.  She is not going to be a toothless 2-year old and my assumptions finally turned out to be right.
Even if it was a couple of months later.  Those rough nights at 7 months were obviously due to this.  Make sure you tell my husband that.

She really doesn’t want to show off her latest milestone & clearly is little unsure about the whole situation.

﻿Ironically, for the most part, Waverly hasn’t acted that much out of the ordinary.  She has definitely been wanting to chew on anything & everything, but has been doing that for months.  I am pretty sure she tried to take a bite out of my arm yesterday.

As sanitary as it is, she would really just like to suck on my keys all day long.  After I discovered her love for them about a month ago, I bought her a Fisher-Price, child-friendly version.  She didn’t want anything to do with them.  She knows the deal & wants the real thing.  Trouble ahead.

As far as real food is concerned – no problems there.  This little piggie eats all day long, with or without teeth.  Waverly loves Eggo waffles, mac & cheese, and I am pretty sure she eats her entire weight in Mum-Mums. She wants her food & mine too.
Not a bad diet regimen for me?

After all of those long, sleepless nights that I convinced myself were due to teething … the past couple of weeks have been the best sleep Waverly Maye has ever had.  She has been going to sleep around 8 PM and sleeping uninterrupted until the next morning.  You know, sleeping like a baby. 🙂
Although now that I have officially documented that, I am sure she will be up all night tonight. #Superstitious

Me & this little lady (with a tooth) are super excited for the weekend.  Even though leaving her in the morning is always hard, it’s a little easier on Fridays when I know we will be together for three days straight.

Cheers to the weekend.  XOXO
﻿

Even if it is a little bit rainy, nothing can get me down on a Friday.  Especially since this week has been a really good one.  Other than the obvious crash of having to leave Waverly for work, the rest of the week has been pretty much perfect.  The weather has finally decided to warm up and we are LOVING it.  I have officially decided that Waverly Maye is an outdoor girl. 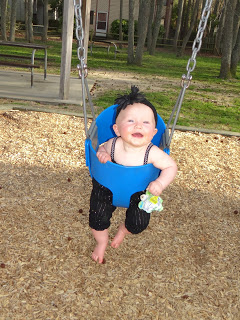 ﻿Even as a newborn, Waverly could go from absoutely angry to an angel in seconds if we brought her outside.  I seriously can sit this girl on the front lawn and she is happy (and curious) as can be. 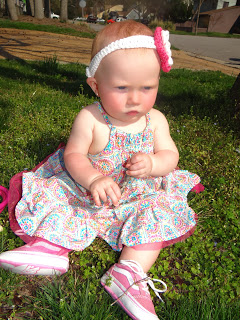 After a few too many days of a fussy baby last week, this weather couldn’t have come soon enough.  We were convinced that her usual cheerful disposition had been replaced because of teething, yet my girl is still toothless and back to normal.  A little confusing, but I’m not asking any questions.  Whatever the reason, I’m just going with it.  When she’s happy, I’m happy. 🙂
Other news of the week?  This independent woman has decided she would like to feed herself.
Outside, of course. 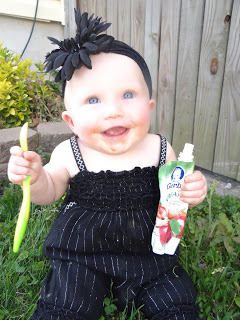 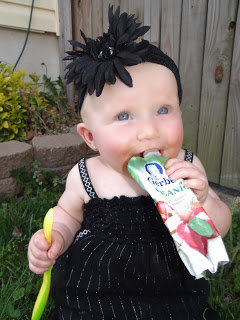 ﻿
Before I know it, we are going to be searching for prom dresses and she will be asking for the keys to the car.  I’m pretty sure I will still be documenting each & every moment then, too.  And something tells me she may not be so willing?
Happy Friday, friends.  Enoy the weekend.
XOXO

Friday is my favorite day of the week.
﻿It always has been, although now more than ever. Each Friday Eve (Thursday night), I tell Waverly Maye that I get to spend the following two days uninterupted with her.  I get to be the first face that she sees, share in her constant happy morning mood, and feed her cereal for the first time of the day.  I love it and look forward to it, with the only downside being realizing what I miss during the week.
This Friday definitely couldn’t come soon enough, and honestly not for the best of reasons.  This hasn’t been the easiest week for us.  As previously posted, we have had a bit of a sleep issue (actually, sleep as been pretty non-existent.)  Furthermore, I have come down with a sinus infection, my students have been driving me crazy, and we have had two sick babysitters.
And on a side note, my “quick run into” Kroger on Wednesday ended up lasting over an hour.  After dropping my cart & all the groceries into the parking lot, my keys were no where to be found.  After walking around Kroger at least five times and eventually resorting to digging out my hide-a-key, Kroger called to explain that the man who had helped me pick up my groceries had accidentally left with them.  Really?  We had to drive across the city to recover they keys.
So those are the obvious crashes of my week.  There were a few.  But rather than continuing my negative rant, it’s on to the crest (high point of my week!).  Which, by the way, completely makes up for all the crashes.  Why?  As I was feeling rather overwhelmed and not at all like the savvy working-mom I sometimes feel I can be … I looked down at my baby girl.  Waverly had the biggest smile, was laughing, and clearly had no idea how stressed I was feeling.  It was at that point that I realized that even on my worst day, I now have her.  And that makes that lack of sleep or bad luck at the grocery store simply trivial and even comical, when I really think about it.  How great is that?  Best CREST ever. 🙂