It has been forever since I have posted here, life has been busy and overwhelming at times.  To be honest I wasn’t sure I would find the time to post again but it feels good to write out my thoughts and all the crazy ups + downs from the past few months.  It has been a roller coaster, but we are still standing + I know I will want to look back on this time and will appreciate having this space to remember it from, just like my first three pregnancies.

The start of this pregnancy was very similar to my others, I was super sick and in survival mode until about 14 weeks — it was touuuugh but knew it would be worth it and that I could survive it just like the times before.  Then on Christmas (and right around the time I was starting to feel better), my entire house got hit with Covid and of course I got hit the worst.  It took a few weeks to fully recover but I did, and was so ready at that point to embrace all the second trimester magic!!!  Anyone who knows me knows I love being pregnant and I was so excited + grateful (still am!!) to experience it all one last time.

Fast forward a couple weeks to the beginning of January, my husband + I headed to our 20 week anatomy ultrasound.  This wasn’t our first rodeo, we knew what to expect, only everything about this time felt completely different.  The tech immediately started checking my due date + asking how big our other girls were, she was clearly very concerned about the baby’s size.  The doctor came in a few minutes later and confirmed that our baby girl was measuring “quite small” and that they would be referring me to a high risk follow-up.  It felt shocking and scary, but I tried to remain positive during what felt like a veryyyy long wait to our high risk appointment two weeks later.

Because of Covid restrictions, I had to go to that appointment alone which made it feel even scarier.  My husband sat in the lobby, and I sat in the room while the tech quietly did all the measurements + I will never forget looking up at the screen to under the 1st percentile all across the board.  I knew something was wrong, she had been measuring at the 4th percentile at the appointment two weeks prior and it clearly wasn’t only not a fluke, but she had dropped in percentiles.  The high risk doctor came in and told me that she had a severe growth restriction, and that they really had no idea why.  The next six weeks would be critical for her and that they were sorry.  I left that room in tears, completely devastated + wondering if we would ever get to meet our baby.  I remember hardly being able to look at the ultrasound pictures of her because I felt so bad, like my body was completely failing her and that there was literally nothing I could do.  I let myself feel REALLY sad that day, but got up the next morning ready to fight for her and in a much better mindset.  I know I have so many special people around me to thank for that, because I never could have done any of this alone.

It’s now been 9 weeks since that high risk appointment and we have definitely had hard moments, but also so much support + prayers — and thankfully, lots of little wins!!  We have officially left my regular OB and are now patients at the high risk doctor, and have had a growth ultrasound every other week since that day.  Our baby girl is still under the first percentile, but has continued to grow steadily each week (just at her own slower pace) + otherwise is doing so well, she’s so active and such a little fighter!  In addition to the ultrasounds, I have NST’s twice a week to closely monitor her, and also had steroid shots a few weeks ago to strengthen her lungs in case she has to come very early.  I am on FMLA from work, resting a lot while the girls are at school, and eating lots of protein + hydrating a ton.  I have also done a ton of testing and everyone we have met with feels pretty confident that the reason she is so small is because of an issue with my placenta not getting her enough nutrients, so we feel hopeful that if that is the case, if we can just get her here — she will thrive!!  The doctors have gone from worst case scenario to a little more optimistic with each appointment, I really am so thankful for how closely they have watched her.  Even though it’s so bittersweet to be at a different doctor and delivering at a different hospital + in such a different scenario than I did with my other three, I know this is where we were meant to be at this time.

Today I am officially 31 weeks (!!!), a number I wasn’t sure we would ever see this time around, and the doctors definitely didn’t — our sweet girl is proving people wrong already!  I am just so grateful for each day she is still cozy + fighting away in my belly.  We have been prepared that she could come at any time if she shows signs that she would do better out than in, but we are leaning into hope and that even if she has to come very soon, we have a wonderful NICU that can take really good care of her.  If you had asked me months ago if I could make it through such a crazy journey so far, I wouldn’t have believed I was strong enough for it, but just like anything else hard in life, you just find a way to do it.  She’s worth it, and I just love her so much already. 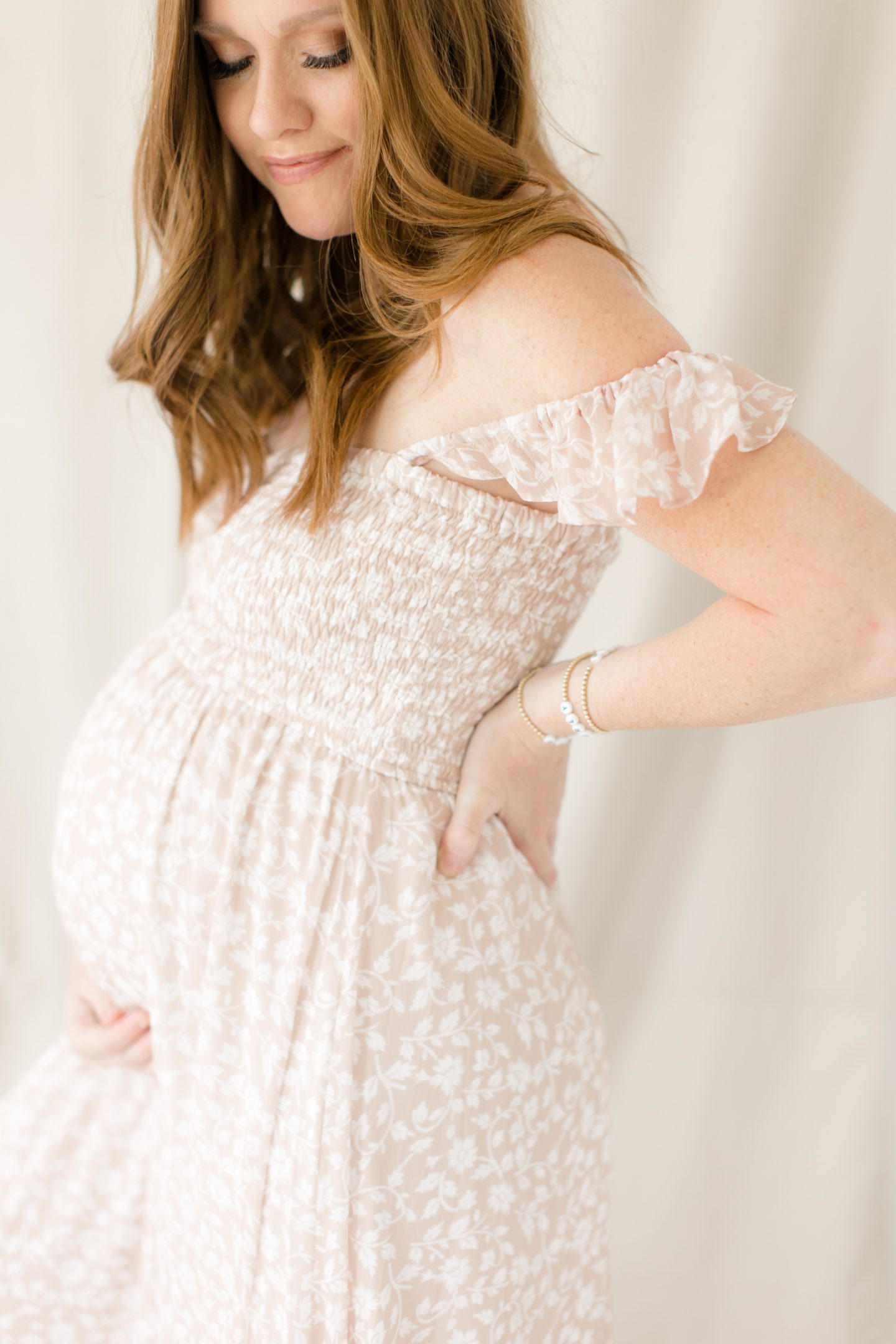 **Photo by Shawna Bielat Photography, who so graciously did these for me early in case she has to come.  She is a GEM!!!!